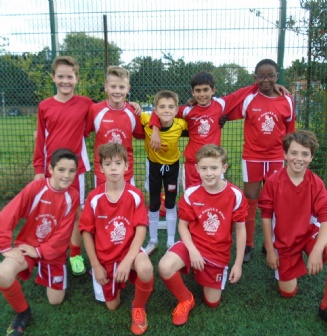 As reported by two boys from Class 5FM

On Tuesday 5th October we played two football tournament matches. In the first game we played against St. John's. We played very well and had a lot of possession of the ball. In the second half, we made two substitutions which worked well. We kept pressure on the other team and marked our men. The game ended at 5-0 to St. George's.

In the second game, we played against George Spicer and played a great first half.  We were given a penalty and we scored. Like the first game, we kept possession of the ball and played well both as a team and as individuals. The game ended at 3-0 to us.

We are very happy that we didn't concede a goal and hope the team at the next match continue our winning streak. We would like to thank Mr B for the training at football club and the support during the matches.